Established in 1903 by Frank and Morris Eckhart, with the patronage of their father Charles Eckhart, the Auburn Automobile Company (AAC) produced some of the most-desirable, aesthetically striking and technologically innovative automobiles.

From its humble beginnings in the corner of the Eckhart Carriage Company factory, Frank and Morris grew the AAC to occupy its own dedicated facility in 1909.  Headquartered in Auburn, Indiana, a town of 5,000 people, the company successfully built a reputable automobile that sold nationwide.

In 1924, Errett Lobban Cord became general manager and would save the AAC from an early death.  Hired by a group of investors from Chicago who bought the AAC from the Eckhart family in 1919, Cord grew the reputation of Auburn automobiles worldwide.  The consummate marketer, Cord knew how to promote racing prowess and in-vogue style, making these attributes synonymous with Auburn to this very day.

The journey ended in 1937 with AAC’s bankruptcy.  E. L. Cord sold the company to AVCO and then headed out west to create new fortunes.  Like a dying star, AAC burned the brightest just before its death, with their automobiles earning many speed and endurance records.  Even today, Auburns are still revered for their elegance and performance.

Generations of the Auburn Automobile 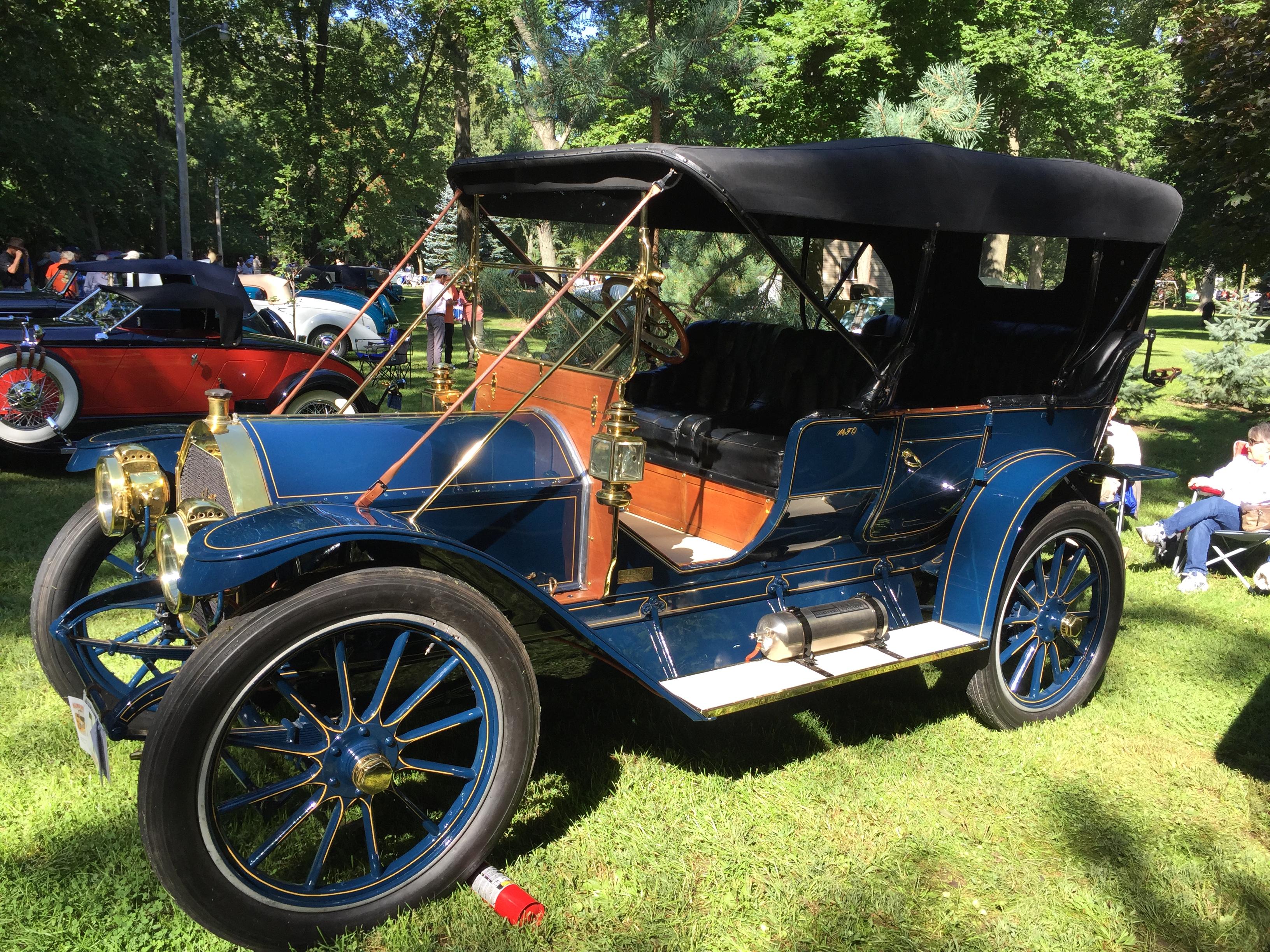 Like many early automobile makers, the AAC began as an assembled vehicle with various components sourced from many suppliers.  Having been an outgrowth of the Eckhart Carriage Company, the AAC had a ready source of craftsmen to construct bodies for the fledgling company.

The Auburn went from a horseless carriage, with an engine situated under the body, to a conventional automobile with the engine in front of the passenger compartment.  Auburn’s made a giant leap from a two-cylinder engine to the massive six-cylinder engine.  In 1918, the Eckhart family made the decision to exit the automobile business, selling to a group of investors, whom Auburn locals referred to as the ‘Chicago Gang’.

It was the Beauty-Six line, introduced just before the Echkart family divested ownership, that grew AACs national presence and proved a small company could develop styling on par with larger automobile makers.  The Beauty-Six used the same chassis as the previous Auburn models, but its more chiseled body styling and integrated radiator shell gave it a contemporary and sporting look.

During this period the automotive industry drastically changed.  Many small auto makers disappeared and the playing field with larger manufacturers became fierce.  The AAC continued to introduce new models with both open and closed bodies.   Even with the optional Weidely overhead-valve engine, an uncommon design in its day, AAC struggled to stand out among the hundreds of automobile makers.

With E. L. Cord’s arrival, AAC would be changed forever.  With the new second-series 1925 models, the Auburn expressed distinct styling.  It was James Crawford, AAC’s chief engineer that made E. L. Cord’s dream car a reality.  This included the rounded radiator shell and the signature “streamer” body modeling which began at the top of the radiator and flowed down each side of the hood and then along the side of the body.

An eight-cylinder engine provided both the prestige and performance E. L. Cord desired to sell the Auburn.  In 1928, hydraulic brakes and the sensational Speedster model were introduced, winning accolades and racing trophies the world over.  In 1929, the AAC began automobile production in Connersville, Indiana, with the anticipation of expansion.  E. L. Cord was ready to take the Auburn automobile to new heights.

The AAC knew it was time for a fresh look and incorporation of the latest automotive innovations.  Flush with the financial success of the previous five years, the AAC developed its first all-new automobile since its founding.  The talented stylist Alan Leamy penned the exterior with flowing lines and a low-silhouette.  Herbert Snow, vice-president of engineering, incorporated the company’s patented X-member into the Auburn frame creating a stiffer chassis than its competitors.

In 1931, the AAC had its greatest sales year with a profit of $4.1 million and production of nearly 33,000 Auburn automobiles.  The triumph was short-lived, and as the Great Depression lingered, sales fell.  The AAC continued to introduce new trim lines, such as the Salon, with updated styling and increased use of chrome.  It also offered the lowest priced V-12 engine in the United States and continually improved its automobile’s performance.

By 1933, the AAC knew it had to make a drastic change in its automobiles to be competitive. 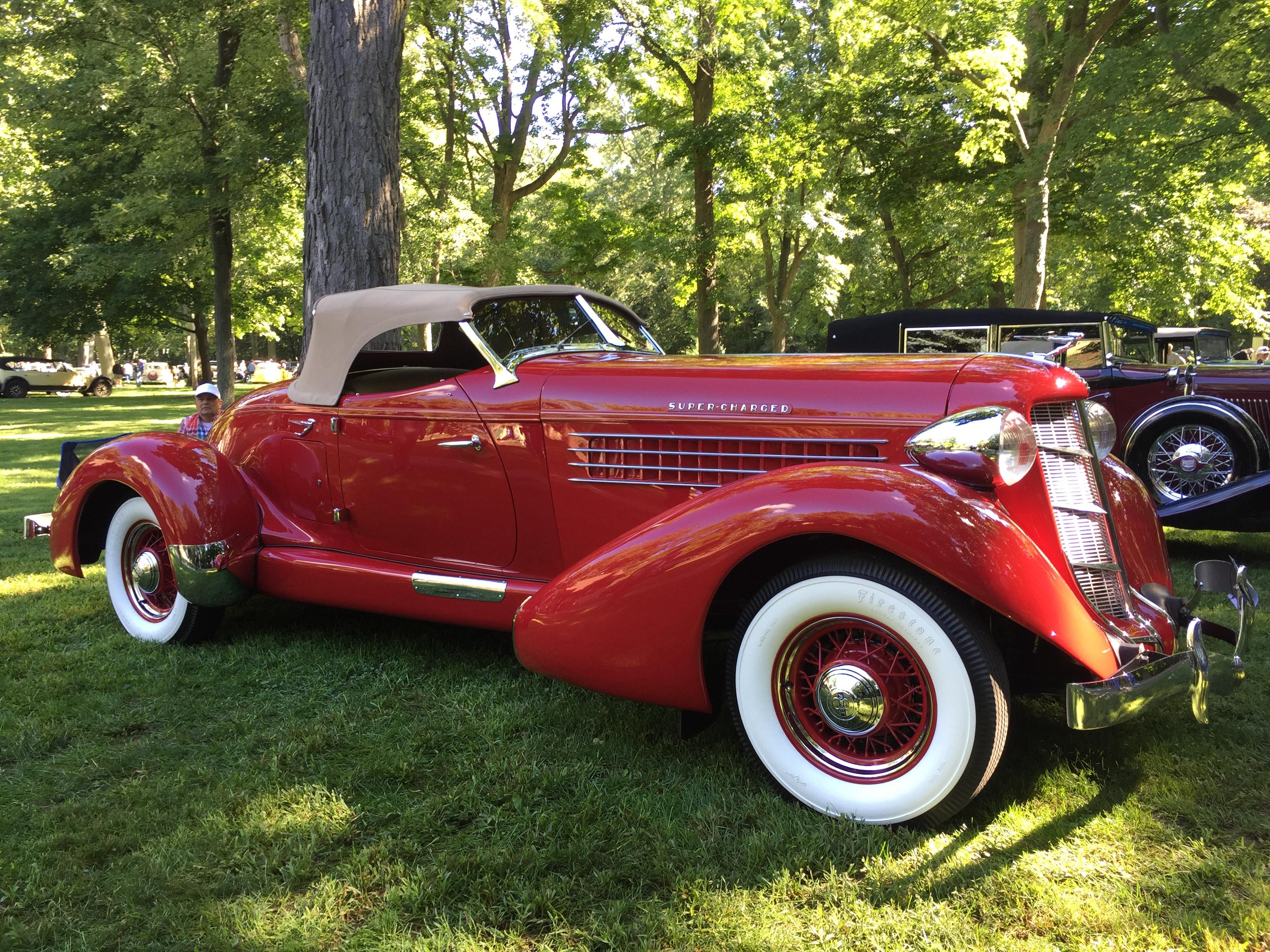 This period was the last complete restyle of the Auburn automobile.  AAC transitioned to a nearly all-steel body, removing wood as a structural support.  It also reintroduced the six-cylinder engine, absent since the end of the 1930 model year.  The radical styling change by Alan Leamy provided the Auburn with an art-deco flavor.  The AAC made a large investment into the nearly all-new Auburn, a cost it could little afford.  Sales increased over the previous year but not enough to make the company profitable.

With internal strife and external market pressures, the AAC performed a face-lift of the new Auburn in 1935, styled by Gordon Buehrig.  The performance option of a supercharger was also added and the Auburn continued to break endurance and speed records.  The AAC also tried to enter the commercial automobile market with a line of ambulance and hearse models.  Unfortunately, it was all for naught, in 1937 AAC declared bankruptcy and passed into the annals of automotive history.

Built by the Auburn Automobile Company and named for its patron, E. L. Cord, the Cord automobile represented both technological and aesthetic innovation.  With front-wheel drive and low, sleek styling, the Cord was a sensation when it arrived on the automotive world stage in 1929.

E. L. Cord witnessed the front-wheel drive concept at the Indianapolis 500 race in the mid-1920s, and was convinced this form of drive system was the future of the automobile.  With the technical assistance of Harry Miller and Cornelius Van Ranst both of racecar constructor fame, and Herbert Snow, vice-president of engineering for the Auburn Automobile Company, the Cord Front Drive, or L-29, became a reality. 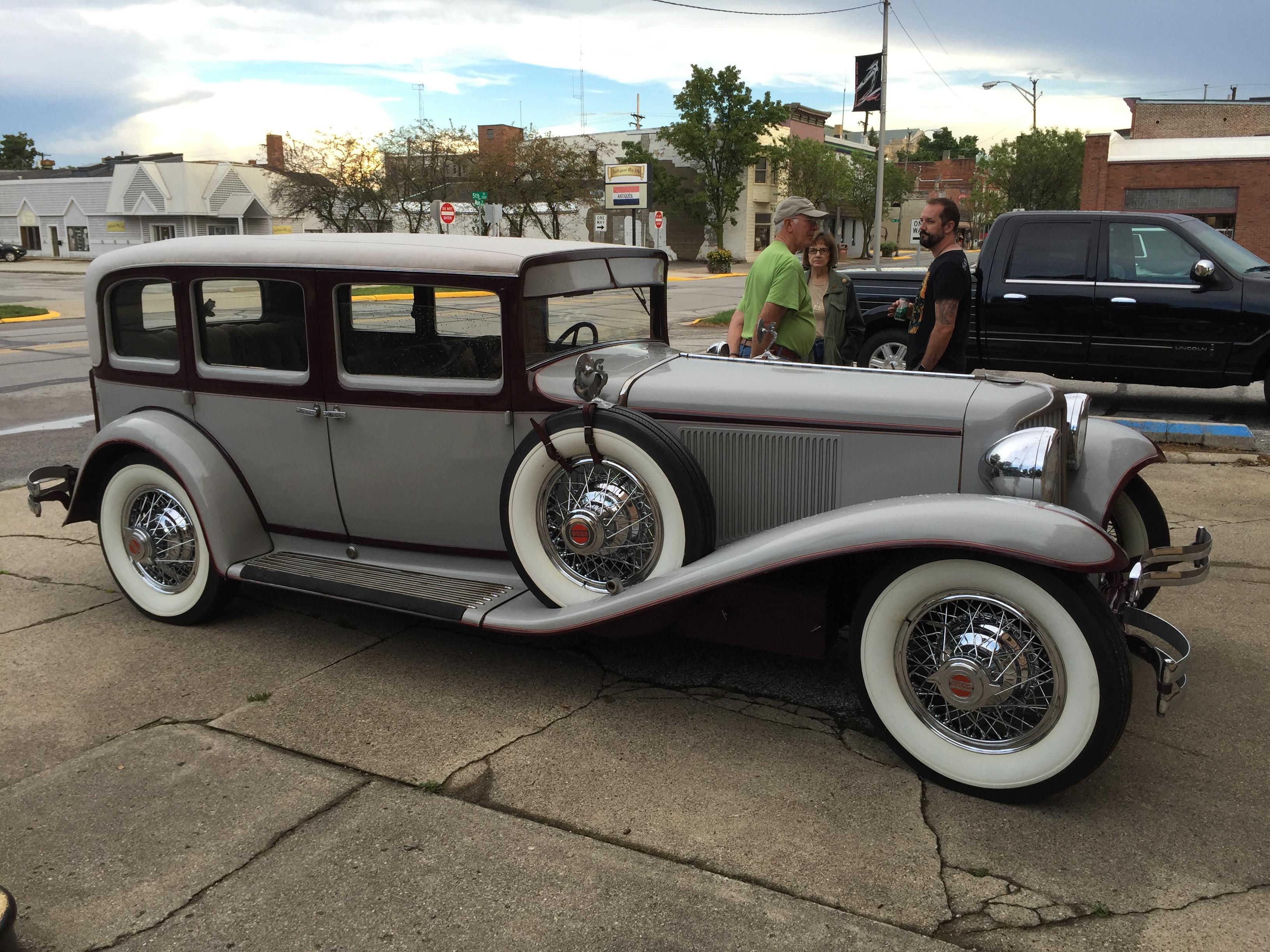 Styling of the exterior was penned by the talented Alan Leamy who was both aesthetically and mechanically inclined.  The Cord’s front-wheel drive system allowed Leamy to create a low roofline, which gave the illusion of a longer body.  Leamy’s preference for an integrated body design from its radiator grill to its long fenders gave the Cord its timeless lines and contours, integrating the technical feature of front-wheel drive into its styling.

Introduced just before Black Tuesday in October 1929, which ushered in the Great Depression, the Cord was a sensation with the public and the press. The Auburn Automobile Company built more Cords than they initially envisioned, albeit taking three years to sell the entire production run.  The Cord L-29 is still considered a masterpiece of classic automotive styling.

The second-generation Cord shocked the automotive world when introduced at the New York Auto Show in November 1935.  The public and press were awestruck by its art-deco exterior, and they scrambled to stand on the running boards of competitor’s vehicles just to glimpse the radical Cord. 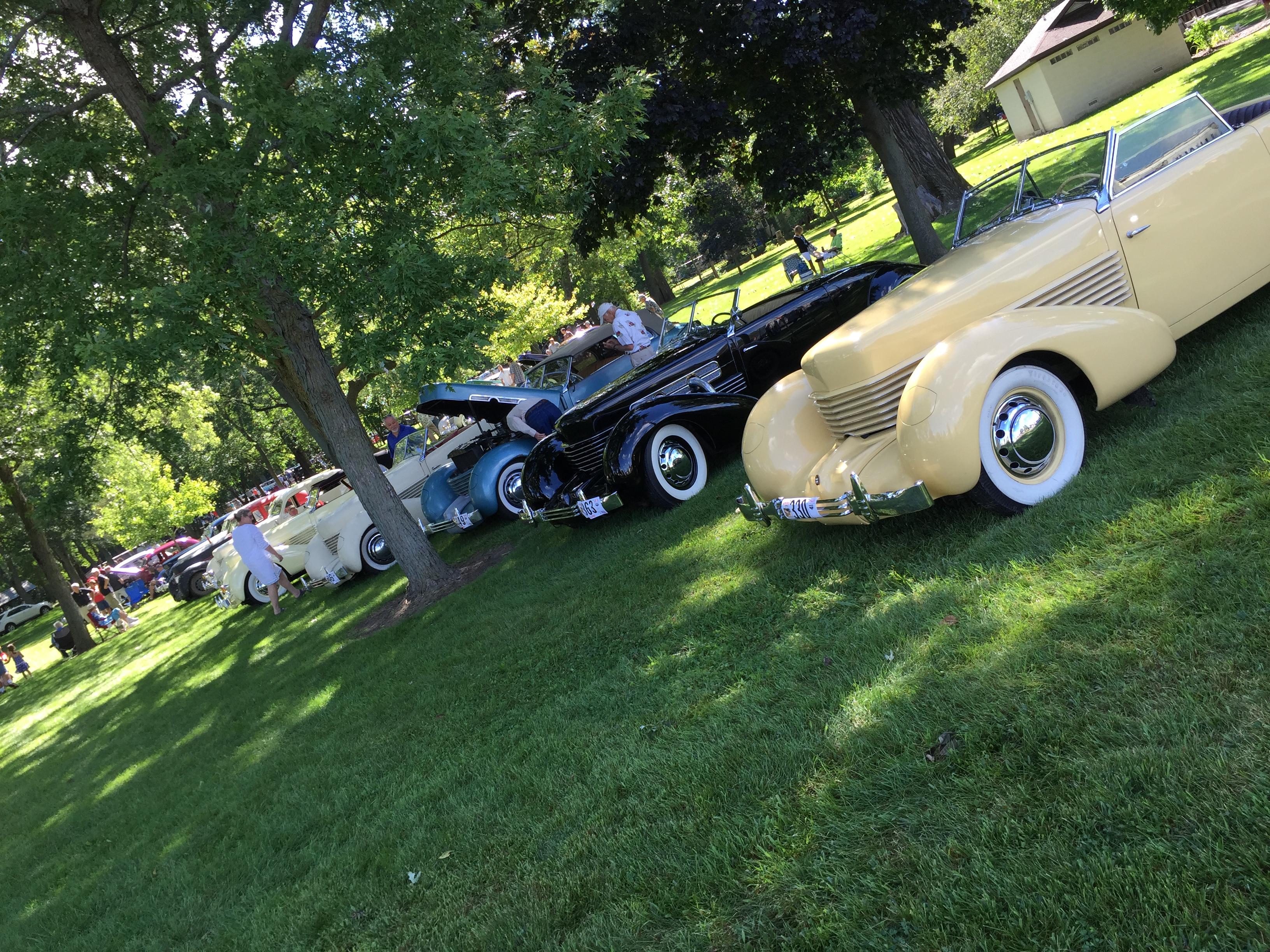 Gordon Buehrig and his talented styling team designed the body of the Cord 810 (redubbed “812” for the 1937 model year) with features that were in stark contrast to its contemporaries worldwide.  With hidden headlights, the removal of the radiator as a styling element, pontoon fenders and sculpted body, this automobile is still recognized as one of the most beautiful automobiles ever created.

The Cord 810 was one of the first production vehicles to use unitized body construction, today a common method.  With a four-speed front drive system and independent front suspension, the Cord provides many of the drivability benefits we enjoy today.

While only built for two years, 1936 and 1937, the Cord 810/812 Series has left an indelible mark upon the automotive design world, both aesthetically and mechanically.

By the 1910s, the Duesenberg brothers were a formidable force in the American motor sports arena.  In the twenties, they won a French Grand Prix, the World Land Speed record and the Indianapolis 500 three times over.  They currently are the only racecar constructors to achieve such a success.

Featuring the first production use of four-wheel hydraulic brakes and a single overhead camshaft eight-cylinder engine, the first generation Duesenberg passenger car was in many ways a scaled up version of their immensely successful race cars.  It was adapted by the rich and famous for its performance and technical advancements. 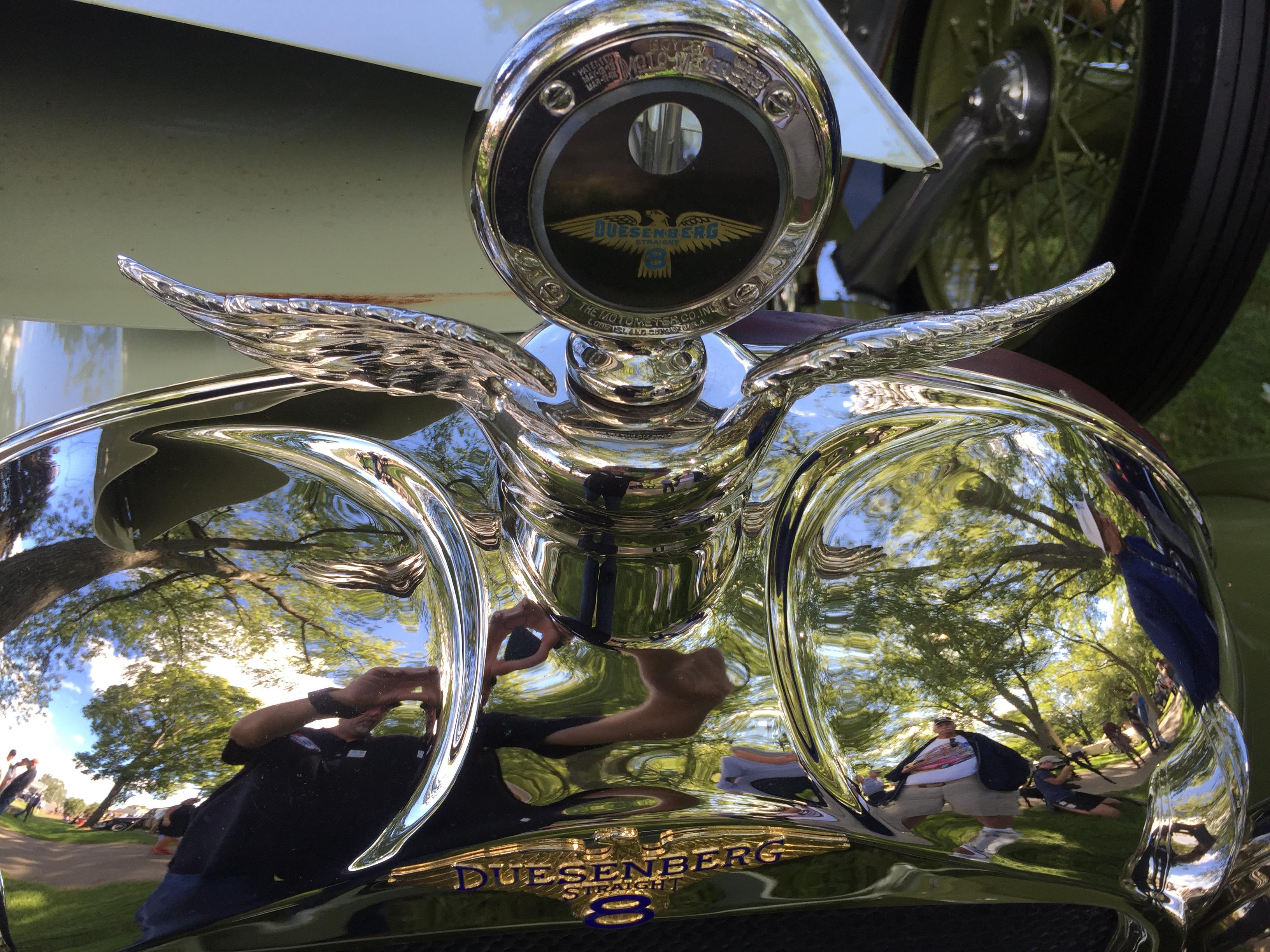 As only an exclusive automobile could be, the Duesenberg was sold as a running chassis with the body built by one of the many custom coachbuilders that existed in North America.  From plain limousines to sporty roadsters, owners could equip Duesenbergs with a great variety of bodies which expressed their personal tastes and lifestyle.

Although an innovative automobile manufacturer for its time, the Duesenberg Motor Company was plagued by financial and managerial problems.  By 1926, it was in receivership and was purchased by the transportation mogul E. L. Cord.  He took Duesenberg’s trademark features of technical innovation and grew the brand into automotive royalty.

When E. L. Cord purchased Duesenberg, Fred and Augie were developing an updated Model ‘A’ with a redesigned engine and frame.  It became the Model ‘X,’ but this redesign did not fit E. L. Cord’s vision for Duesenberg and thus had a short production run of thirteen chassis.  E. L. Cord desired to have his jewel in his automotive crown to be the largest, most powerful and fastest automobile ever built.

There Model ‘Y’ preceding the famous Model ‘J.’  The Model ‘Y’ utilized a new engine design and featured the radiator shell, hood and fenders that would become iconic on the Duesenberg Model ‘J.’  Only a solitary pair, a touring car and a sedan, are known to have been constructed.

Fred Duesenberg was given free rein to create the largest, most powerful and luxurious automobile.  Introduced with great fanfare at the 1928 New York Auto Salon, the Model J awed the public and press. 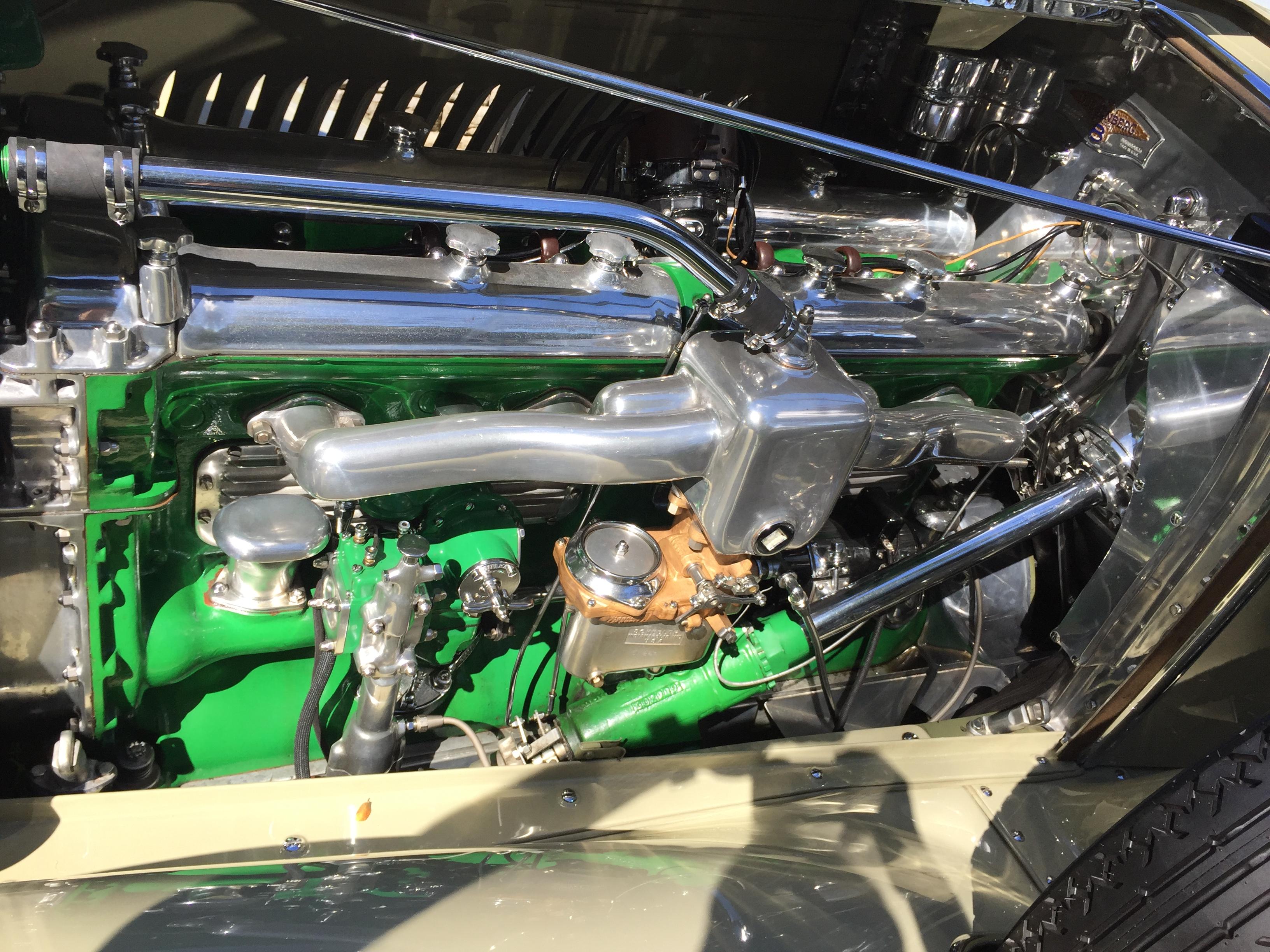 With a 265 horsepower straight-eight engine, it easily surpassed its nearest rival by 100 horsepower.  Technical innovation such as the precise automatic chassis lubrication mechanism typified Duesenberg’s attention to detail.

Graced by some of the most striking custom bodies built, from the disappearing top roadster to the dual-cowl phaeton, Duesenbergs epitomized exclusivity and power.  They were an expression of their owner’s personalities with a wide range of custom bodies artfully created by coachbuilders worldwide from Pasadena, California, to Paris, France.

The effects of the global economic crisis and social change brought an end to the ‘Mightiest Motorcar.’  Carrying the hefty price tag of $15,000, in a time when the average American family only earned $1,200 annually, the Duesenberg became a symbol of economic disparity.  Today, the Duesenberg Model ‘J’ is synonymous with the grace and power of the Golden Age of the automobile. 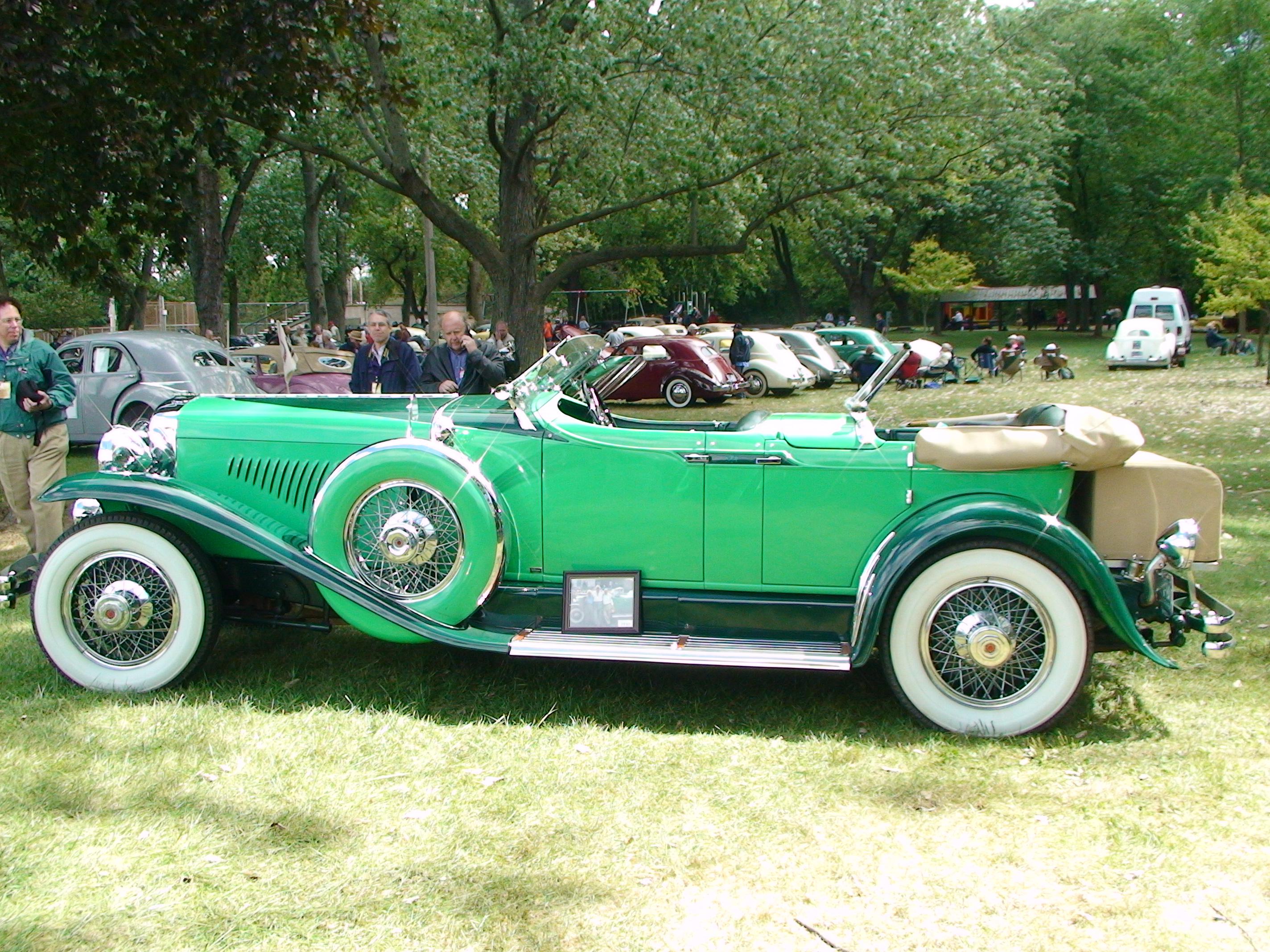