The ACD Club is rolling out a new online membership system. All ACD Club Members should have receivied an email with enrollment instructions. You will use your email address as your login, and select a new password. This account will be used to renew your membership, update membership information, and make changes to your membership record.

J-426/2452: Trying to complete the history of my Grandfather's Duesenberg 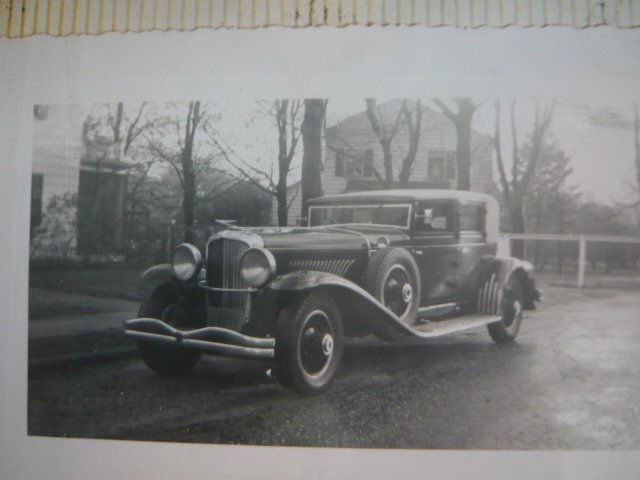 I am new to this forum, but not new to growing up seeing and hearing about the mighty Duesenberg. Although I never met my grandfather nor saw his Duesenberg in person, my dad has shared many fond memories about the car.

On May 23, 1947, my grandfather, Robert A. Radcliffe of Hempstead, New York bought a Duesenberg from Rumplik's Garage in East Islip, New York for the sum of $800 cash. This car was J-426/2452. I have NY registration receipts and the "car invoice" from Rumplik's Garage to this day. The NY registrations end in 1951, and that is when my dad believes my grandfather sold it. Not long after, it was hit by a logging truck in the Pocono Mountains in NY (or so the story goes...).

About six years ago, I reached out to Chris Summers and he had some very interesting information. Apparently, a portion of the body, the engine, and the chassis were all salvaged. The chassis (2452) was repaired and sold to a buyer in Texas. The engine was in MD in the 1970s. The rear half of the body was restored by Bill Dreist of MI and used on J-237/2257. Summers told me it had been incorporated with the front half of that car's original Willoughby Berline body. I have now seen pictures of this car as it exists today, thanks to Summers. I found Bill Dreist's contact info online but have not been able to reach him by phone yet.

We have always known the original owner was Antonio Chopitea of Lima, Peru. I have now learned that Antonio and his brothers had a slew of Duesenbergs, both new and used, as well as custom Packards. They had cars stashed all over their properties in South America and the eastern United States. I have found pictures of Antonio and his Packards and learned of the other Duesenbergs that have been confirmed of his ownership.

What we would like to know is if J-426 was a 1929 or 1932 (which is what the NY registration and Rumplik's receipt state). We think it was a 1929 that went to Lima, Peru until it was brought to NYC in 1932. My dad said his father always said the car spent time in South America when it was brand-new.

I recently learned that Derham built a "sister car" (if you will) to J-426, which is J-183/2201. I would like to know if it was built at the same time as J-426, as the bodies are very similar, if not identical. I have compared it to pictures of my grandfather's car. The J-183 car has quite a history as it became Jim Hoe's racer after its 1933 wreck...then went on to receive a beautiful restoration with a replicated Murphy touring body.

Any possible information that we do not know is greatly appreciated! I would also like to get in touch with Bill Dreist and Randy Ema to see what they can share about the car.

Thank you,
Robert A. Radcliffe III

The dark picture below shows the car as it looked when my grandfather bought it- the lighter (tan) top was the new top. The picture with the dark top shows the seam where the open chauffeur's compartment would come off.

My grandfather also found a Duesenberg trunk and added it to the car, thinking the original was missing. It is my belief that the Derham body did not originally have a trunk as part of its design...

Less More
01 Sep 2017 18:29 #33492 by J426
Replied by J426 on topic J-426/2452: Trying to complete the history of my Grandfather's Duesenberg
I just went through the registration stubs from NY for my grandfather's Duesenberg and noticed the serial number stating 2456, which must be incorrect. That number belongs to J-444, which is the Joe E. Brown/Howard Hughes car...interesting to see why that number was used instead of the correct 2452. Perhaps a typo by Rumplick's Garage or is there more to the story???

Less More
07 Sep 2017 03:37 #33517 by Jonathan Richards
Replied by Jonathan Richards on topic J-426/2452: Trying to complete the history of my Grandfather's Duesenberg
You have provided a fabulous J Duesenberg history to our website. The ACD Club just completed the 61st Annual Reunion/Festival over this past Labor Day weekend and after Randy Ema and Bill Dreist have read your posts I am sure they will be in touch with you. As usual Chris Summers has been informed and helpful to an ACD enthusiast. My grandfather bought new in 1932 an Auburn 12-160A Brougham which is still on the road in largely original and unrestored condition belonging to an active West Coast Club member. Our grandfathers certainly had good taste in automobiles. I cannot know if you are an ACD Club member but I highly recommend you join. One does NOT need to own an ACD vehicle to belong, Best Regards, J:onathan (Jack)} Richards #1080 at Chesterfield, MO /Cell Phone 712/621-1854